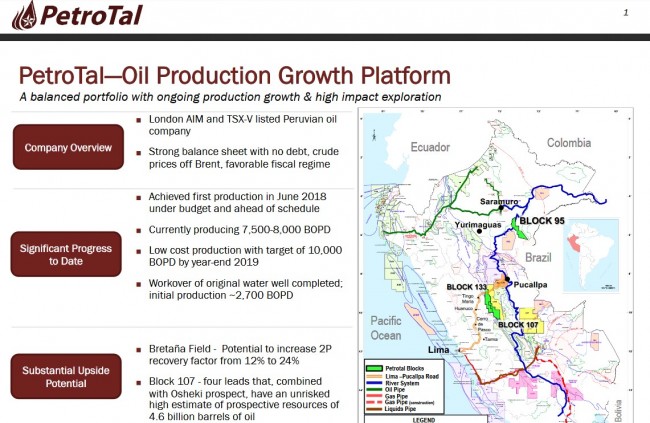 I have got myself a modest lump of PTAL now.

If they do what they say the share price should be at least double by this time next year, quite low risk as well.
Top

Gosh, that brings back memories 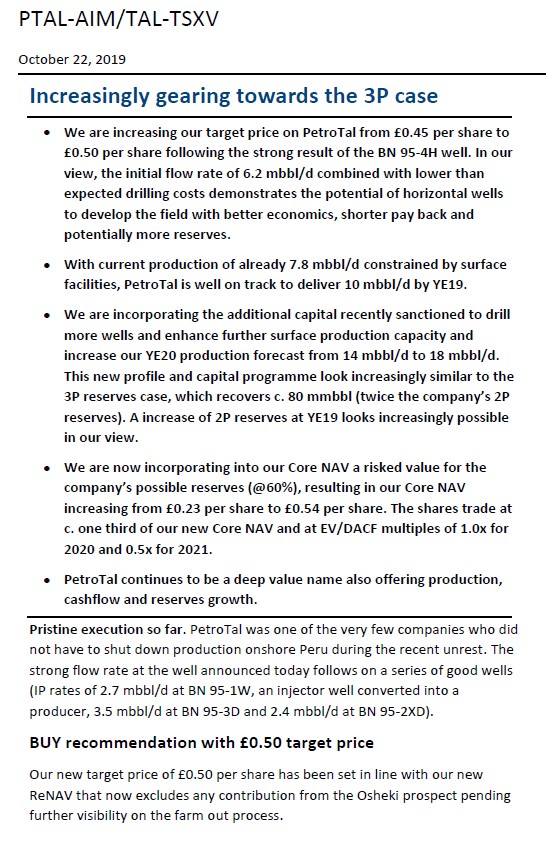 Calgary, Alberta and Houston, Texas - November 25, 2019-PetroTal Corp. ("PetroTal" or the "Company") (TSX-V: TAL and AIM: PTAL) is pleased to announce that drilling of the Company's second horizontal well ("5H"), located on the Bretaña field, Peru, is progressing according to budget and timeline. The well reached the target Vivian formation at the prognosed vertical depth of 2,696 meters and 700 meters of the planned 870 meters horizontal section have been drilled, which is inside the main productive oil reservoir. Completion of the well, tie-in, and initial production tests are expected to commence on or before December 15, 2019.

The Company also expects to complete commissioning of the Central Production Facilities ("CPF-1") during the week of December 22, 2019, increasing the nominal production facility capacity to 10,000 barrels of oil per day ("BOPD") and 40,000 barrels of water per day ("BWPD"). Based on our recent field production experience of being able to produce 8,000 BOPD with a facility having 5,000 BOPD nominal capacity, management similarly expects that CPF-1 will be able to handle in the order of 15,000 BOPD.

In light of management's confidence that the 5H will behave similarly to the 4H well, which produced 200,000 barrels of oil in just 35 days, and that the CPF-1 will handle more than its nominal oil processing capacity, the Company is pleased to increase its year-end production guidance from 10,000 BOPD to 11,000 - 13,000 BOPD.

"We are delighted with the progress made on the 5H well and the commissioning of the CPF-1 facilities. We set ourselves an ambitious target of achieving 10,000 BOPD by year-end 2019, so to exceed this is of great testament to the team we have assembled. I would like to congratulate our operations and drilling team for executing at an extremely high level since we started operations two years ago, and showcasing that we can handle more oil than the equipment's nominal capacity which is now allowing us to forecast higher 2019 exit oil rates and, importantly, a strong production base as we enter 2020."
Top

That’s pretty bold statement: in translation as I read it, the facility has nameplate capacity of 10k. But we are gonna do 15k because we ran the last plant pedal to the metal and got away with it.

I mean, seriously? What will the future investigators of the inevitable terrible incident think when they see stuff like that?

I think it good policy to brief the design engineers with what you are planning to output, not starting with what you want to run at 50% overcapacity.
Top

Declared their interim dividend last week, they keep delivering on what they promised and so long as they continue to do that then all is good.

Should be news this coming week on the 5th well.
Top

Yet another superb result and update

Now that BP is looking to go Exploring in Peru, it would be perfect if they were to farm in to some of PTAL's area - and PTAL are looking for a partner for their massive potential at Osheki.

Half a billion barrels mean prospective resources at Osheki, would be great to get that drilled in 2020.

130 page document is now on SeekingAlpha.

For those who have Facebook there is an Investors Group on Facebook with loads of good info and posts on Petrotal.

Just apply to Join the Group and when confirmed you have access to the info and posts.

CPF-1 commissioning should be complete this week, so news soon, be it before Jan 1st or the first week of January. Not a lot of stock around now, difficult to buy any decent size.
Top

The companies Petróleos del Perú-PETROPERÚ SA and PetroTal Perú reached an agreement for the acquisition of oil from Lot 95, in the Loreto Region, for its commercialization by PETROPERÚ. The oil in question corresponds to the production of the Brittany field, operated 100% by PetroTal.

The agreement contemplates the acquisition of most of the production of the Lot, which has been increasing significantly during this year with even greater growth prospects for 2020, and its subsequent transport through PETROPERÚ's Norperuano Pipeline (ONP).

An important aspect of this innovative financial and commercial operation is that the purchase of oil will be carried out taking as reference the delivery of the same in Station 1 of the ONP, located in San José de Saramuro, department of Loreto. This will inject greater dynamism into Petrotal, which will not have to wait for the oil to reach Bayóvar in order to sell it. For its part, PETROPERÚ will benefit from additional income for making this purchase at the place of origin of the crude oil and will ensure that it does not run the price risk until its sale, with the monthly compensation of possible oil price falls until This one reached Bayóvar.

The term of the contract is for one year, with the option to be extended by agreement of the parties.

For Carlos Paredes Lanatta, President of the Board of Directors of PETROPERÚ, this important agreement shows the commitment of the state oil company with the development of the operations of the oil companies in the area and with promoting a greater volume of transportation for the pipeline. He pointed out that "the consequent increase in the volumes of oil to be transported through the ONP will improve the economy of said operation, contributing to cover its fixed costs, close its structural deficit and make it a profitable business."

Likewise, this public-private cooperation mechanism contributes to the development of the hydrocarbon industry, promoting oil investment programs in the Loreto Region, with the consequent benefits for the inhabitants of our Amazon.

On the other hand, the signing of this contract will guarantee the supply of local oil for the operation of the new Talara Refinery, whose start of operation is scheduled for the end of the first quarter of 2021.

This synergy with the PetroTal company is part of the objectives set by PETROPERÚ, linked to the strengthening of its assets, the improvement of its management and its operational efficiency, and the financial sustainability of each of its business units.
Top

Given the Company's increased oil production from the Bretaña oil field in Peru, the oil sales agreement enables PetroTal to ship all oil in excess of its existing 1,200 barrels of oil per day sales agreement with the Iquitos refinery, through the 854 kilometer North Peruvian Oil Pipeline, owned and operated by Petroperu. Petroperu has agreed to purchase the oil at pump station No. 1 located at Saramuro, approximately 460 kilometers from the Bretaña oil field. The Company will barge the oil to Saramuro at an estimated average cost of US$4.25 per barrel. The oil delivered at Saramuro will be sold based on the monthly average reference price of ICE Brent minus US$4.00 per barrel. When the oil is ultimately sold by Petroperu at Bayovar, PetroTal will receive a valuation adjustment based on the actual price achieved by Petroperu, whether higher or lower.

This sales agreement will allow PetroTal to receive oil sales revenue earlier, allowing PetroTal to maintain strong liquidity. The oil sales contract allows us to submit monthly invoices, rather than having to wait for the ultimate sale at Bayovar after sufficient oil volumes have been achieved for a tanker to take the oil to its final market. This oil sales contract is initially for one year and can be extended with the agreement of both parties. For Petroperu, the increased oil volumes through the pipeline will enhance economics since Petroperu will earn the previously published pipeline tariffs along with a commercialisation fee.

Hopefully this means they will drill at least the Constitution prospect in Block 107 in 2020. If they can drill that (as its right next to a new road) and strike oil, it would derisk the other prospects and then maybe get a farm in partner to drill Osheki.

Drilling Osheki is the exploration goal, one wonders if they might do it alone, or go for the lower cost Constitution well first to make it easier (in the event of success and proven oil) to get a farm in partner to stump up more cash for less of the asset to get on board.
Top

Exciting times ahead when this work on reserves upgrade starts in March 2020. Yanayacu is he most similar analogue....and if it is.....then RF will be near 30% (currently only worked on 12% RF)

Lets talk about the Reserve upgrades trigger and why its a big one.

The recovery factor at Bretana is to date 12%,this means they will theoretical have around 40 mill barrels they could produce.
A bit more then Maha Energy has in reserves,they have around 36 mill,to date.

The Company belives they as a start can double the recovery factor to 24%.
This is a huge deal becouse that doubles the values and assets in the Company to 80 mill barrels.

If you see on the posted picture, other fields in the same Basin and same type of oil, the avrage is 32.1 %..

The Company is priced based on the fact that they only will get up 12% of the oil.
After recent drills, production and test there most like will be upgrades.

12% and 40 mill barrels dont sound much, but it is. Its worth billions.
Some People belives we also will reach 30 %, if that happens there will be a brutal repriceing of the company, resulting in a much much higher shareprice and targets.
That gives us 100 mill + mboe in reserves!!

O/G companies are mostly priced after their reserves.

"80 million of likely 2P reserves at $30 netback after tax gives $2.4bn of undiscounted, mostly undiscovered point forward value. Adjust that for time and u have a five bagger at $65 Brent...!"

All this work regarding Reserve upgrades is set to start in March, but it could start before. 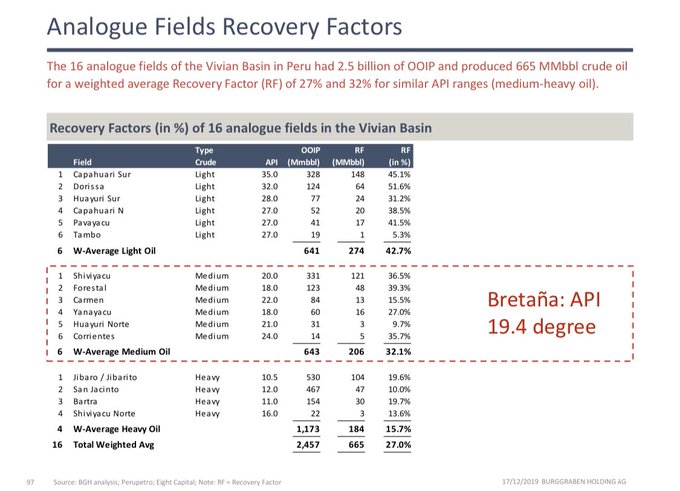 Representatives of Produce, PetroPerú and the Ministry of Energy and Mines were at the opening of the Surface Facilities Center.

The PetroTal company inaugurated the facilities of the Center for Surface Facilities (CPF 1) processing center located in the Bretana Field, in Lot 95, in Loreto.

The opening of this infrastructure was accompanied by representatives of the Ministry of Production, Energy and Mines, and PetroPerú. The visit of the officials also aimed to observe the commissioning process of the facilities.

“We are very happy with the presence of our visitors to the Brittany Field, where they have been able to see the important advances that we have been making, both in the development of our operating infrastructure, which will allow us to significantly increase our oil production, but also in the development of our excellent relations with the people of Brittany and Puinahua, "said Manolo Zúñiga, CEO of PetroTal.

The new infrastructure will allow the processing of 15 thousand barrels of oil per day. According to PetroTal, in the last days of December, barrel production in Lot 95 reached 13 per day...................continues......see the link and Google Translate
Top
Post Reply Previous topicNext topic
58 posts

Users browsing this forum: No registered users and 3 guests