Does anyone remember those removable platter hard drives. About seven or eight brown platters high and at least 15" wide. They used to live in a perspex lid and unlock device and were slotted into something the size of a spin dryer.

Once up and loaded they would clunk and clank.

The stories say that all of this clangling and banging from the read/write heads could over time make the hard drive box move along the room (My washing machine does this, I think it is try to escape).

The end result of this hard drive thrashing was drives running away and unplugging themselves from the mains.
Top

I still have a pretty old HD from a Sirius/Victor 9000 hanging around. It is 10Mb (I think). When it wasn't working very well I was able to open it up and tweak it's internals while it was operating. That plus a strategic spot of 3 in 1 oil eventually got it going again.

This kind of thing? http://www.columbia.edu/cu/computinghistory/rp04.html

Aaaah, the good old days when they were still called Winchesters. (A name, I think, that owed more to the world of guns than to a southern British city?) I remember that when I bought my first home computer (1983), the first unattainable thing that all the hobby mags said you needed for your mighty 48k ram machine was a printer, and the second was a Winchester.

We had no idea why we should have wanted one, or what we could have done with it if we actually had one. But we hung around Tottenham Court Road every lunchtime, just gazing at this sort of stuff in the tech shop windows.

The Winchester disks - IBM 3340s aka 'flying saucers' - were semi-sealed units where the entire unit was inserted in the drive. Their predecessors - the ubiquitous 3330s - had the case quarter-turned using at handle at the top when the case then came off entirely apart from the base.
I think one idea behind the Winchester design was to keep the platters as free as possible from airborne dust.
Top

Aaaah, the good old days when they were still called Winchesters.

My first proper job was as a computer operator at a time sharing bureau in London which had PDP-10s (2 KA10s and a KI10 when I was there) and rows of RP02s and RP04s. 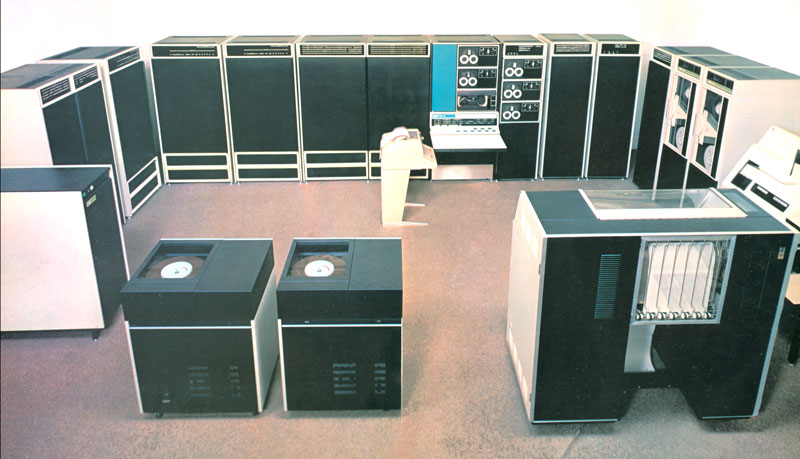 http://www.columbia.edu/cu/computinghistory/pdp10.html, which describes it as a "large" configuration but I see only 48K words (36 bit) of memory and 2 Rp02s, the ones I worked on had 128K (256K for the KI) and around a dozen drives each (and all of the other kit too).
Top

Aaaah, the good old days when they were still called Winchesters. (A name, I think, that owed more to the world of guns than to a southern British city?)

Your link says it, named after the 30/30 Winchester gun.
30MB of removable and 30MB fixed.

Some people did refer to hard drives as Winchesters for a goodly time.
Top

The National Museum of Computing near Milton Keynes (Bletchley Park site) has some interesting exhibits including the biggie in the photo,
http://www.tnmoc.org/explore/mainframes
The museum is normally open afternoons only on Thursdays and weekends but check first.

The grand-daddy - at least in capacity - was the IBM 2321 Data Cell that had umpteen small strips of magnetic tape accessed by something akin to the crane use in seaside 'grab the fluffy duck' arcade machines. A 2321 held 400MB and, perhaps because of this (the then standard 2311 disk drive then held only 7MB) sold well. They were driven by high-pressure hydraulic lines with a 5 gallon sump in the base.

On the odd occasions that the access mechanism broke, the results were spectacular!
Top

...Moved by a sentimental impulse after seeing this picture of my old Sirius 1 system: Old Computers

I eventually decided to dig it out and try to boot it up after all these decades. Comments online by an ex Sirius service engineer suggested I might not be lucky as their power supplies had a tendency to go POP! And all those electrolytics are from another century... Anyway, I just dug it out (God, it's heavy), gave it an external wipe down, checked inside, connected it up and turned it on. (God it's noisy)

The floppy light came on, I could hear the HD seeking but the VDU screen remained disappointingly blank. Oh dear. I tried using the keyboard to turn up the display - 1980s technology! - but no result. I then tried fiddling about with the VDU connector plugged in at the rear of the console. A brief crackling came from the speaker and a flickering image appeared on the screen. Well, half of it.

The VDU was not synching. A bit more fiddling with its connector and, a stable image. It lives! It was the Sirius boot up image followed by the start up for MS DOS 3.1 asking me to enter the current date. (Wonder how it will take to 21st century dates?).

Anyway, my enthusiasm was suddenly damped as I noticed an extremely acrid, unpleasant smell was now filling the room, followed by a smoke haze. I thought it prudent to remove the mains power at that point and open a window.

I may have a nasty taste in my mouth and a slight headache, but it's a start, no?

I wonder how that turned out?

Update on the Sirius.

Whilst I haven't yet fully stripped it down to get the power supply out I have been able to peer into its innards through slots in the internal rear mounting plate. Surprisingly, from what I can see, it isn't a failed electrolytic, it looks like an ordinary 250V 0.22uF block filter capacitor on the secondary side of the little input transformer has cracked and burned away at one end. Should be able to replace that. And then, Va-Va-Voom!
Top
Post Reply Previous topicNext topic
11 posts • Page 1 of 1

Users browsing this forum: No registered users and 1 guest