Thanks to brightncheerful,Dormouse,Silverstar64,dave559,OLTB, for Donating to support the site

This is about bond ETFs, but I think it fits better here than on the Passive Investing board.

I am thinking of swapping out of the last two (or maybe just one of them) and moving into IL bond ETFs, from one (or two) of the following
- UK IL gilts (INXG)
- US IL Tips (0-5yrs)

Being a bear of very little brain, my simplistic thinking goes like this:
I feel, and I see it a lot in the papers also, that inflation will pick up in the coming years.
The total return from both has been positive although lackluster compared to the others over the period. I worry about the ability of EM govts to pay back debt dominated in USD. And the amount that comes in monthly from the EU corp bond is such a piffling amount, it annoys me having to enter it.
Am I better off doing nothing?

Gold is a global currency (so will also tend to rise if the £ declines), a commodity, and a form of currency unhedged zero coupon undated inflation bond. Being long dated (perpetual) its price moves similar to very long dated index linked gilts

Not a great image, but provides some insight, 5 year chart of long dated index linked gilt price versus gold price 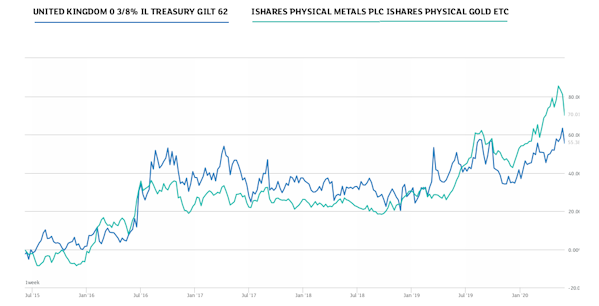 Adding a little gold to your bond set might be worth consideration.

With bond funds you're paying fees/costs/currency-conversion etc. Personally I prefer something like this (US data, but works similar for UK investor). That's biased rather than being economic/monetary contraction/expansion neutral (50/50 stock/gold) in mind that progress tends to be saw-tooth (two thirds of time stocks doing well, one third of time in decline).

In this image I've included the average for the yearly best and worst cases for each decade and rightmost is the average of those two. As the values are £ and UK inflation adjusted that rightmost figure is a guide as to the real (after inflation) average gain that 50/50 stock/gold provided in each decade 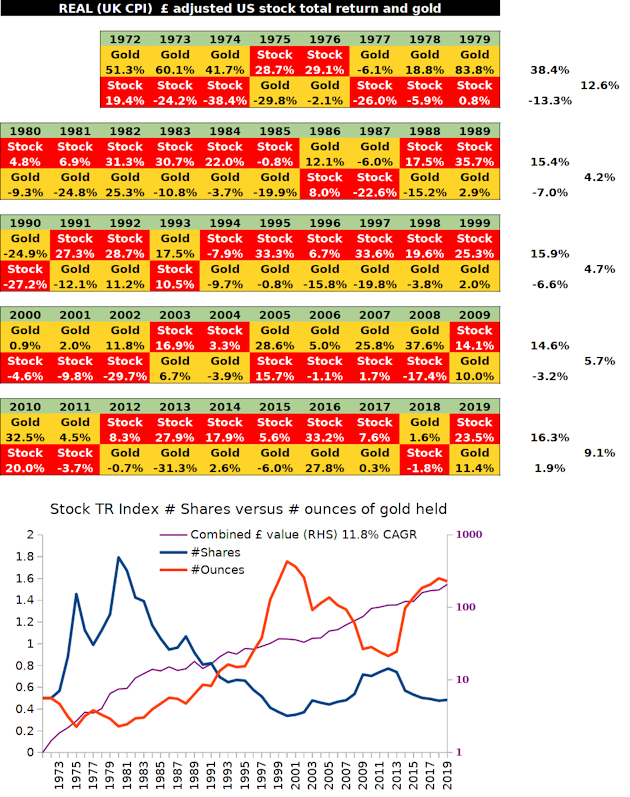 Yearly best or worst asset is sporadic, but there are also long cycles involved. The easiest way to trade that is to set target weightings (67/33, 50/50 ... whatever) and once/year rebalance back to that target weighting. That will have you accumulating more ounces of gold/reducing number of stock shares over some periods and vice-versa over other periods. The bottom part of the image shows the value (purple line/right hand scale) for 50/50 yearly rebalanced stock/gold, the other two lines show how ounces of gold/number of stock shares rose/declined over time due to rebalancing/price movements. Again though to reiterate I'd go with 67/33 stock/gold overall as a 'Bond' type holding. Third each UK stock, US stock, gold is a simple choice. See this as a guide to how that might pan out relative to stocks. In this link it shows data since 2000, with a 4% Safe Withdrawal Rate being applied. If you tick the inflation tickbox in the Portfolio Growth chart and recently that looks like 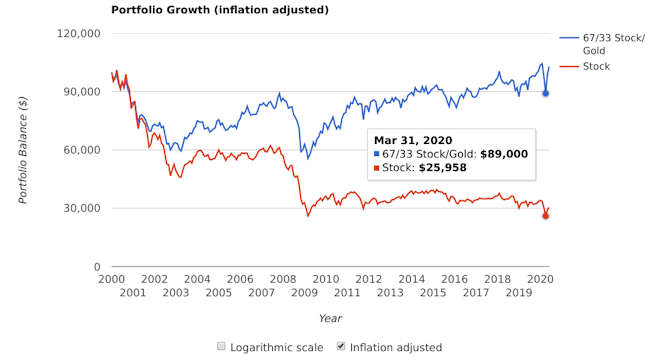 i.e. $100,000 Jan 2000 portfolio value for all-stock is down by around 75% to around 25% of its inflation adjusted start date portfolio value, whilst 67/33 stock/gold is doing ok'ish. It was a very similar pattern in the 1970's - when inflation was high/rising and real yields moved negative.
Top

Are these the same charts you post regularly or is there something different for a change?

Are these the same charts you post regularly or is there something different for a change?

Yes I try to post what might be helpful information, and strive to be polite, rather than just posting 'comments'. Not everyone has the time/inclination to read every thread/post.
Top

1nvest, could you please clarify, is there a word or more missing from the end of the first part of your first sentence? I.e. Index linked gilt prices tend to move in reflection of real xxxxxxxx (what)?
Thanks.
Top

So, what I assume he is saying, is that an inflation linked bond will also perform when the non-inflation part of it performs. If both part's perform then you will get great performance, although rising inflation and falling interest rates, aren't the typical combination. You will get outperformance (over conventional gilts) in scenarios where the inflation driver exceeds the interest rate driver, most often seen when interest rates rise (gilt prices fall) but inflation rises more.
Top

1nvest, could you please clarify, is there a word or more missing from the end of the first part of your first sentence? I.e. Index linked gilt prices tend to move in reflection of real xxxxxxxx (what)?
Thanks.

Opps! Thanks. Should of course be inverse of real yields. If nominal Gilt yields are 5%, inflation is 10% (-5% real yield) then Index Linked Gilt prices will tend to have risen substantially.
Top

Now I'm confused. INXG is entitled "Index-Linked Gilts" but their investment objective is listed as "to track the performance of an index composed of UK inflation-linked government bonds".
Top

Now I'm confused. INXG is entitled "Index-Linked Gilts" but their investment objective is listed as "to track the performance of an index composed of UK inflation-linked government bonds".

Well by buying a basket of Index Linked Gilts you will very likely track the performance of an index composed of UK inflation linked bonds.

Inflation linked government bonds aren't solely an inflation based return. They are certainly "linked", but you are also investing in a bond issued by the government, so will also be exposed to interest rates, and also the credit worthiness of the issuer.

If you want to just be exposed to inflation then you need to have an opposite exposure, or a short position, to those other effects. Traditionally, at least for the UK, the issuer's creditworthiness isn't typically considered a factor, and therefore a necessity to "hedge" against it. That isn't the case for the interest rate component.

If it is easier to understand this consider a case where inflation is say 2% and interest rates 0% (and the same projected into eternity such that forward rates are the same).

If you wanted an exposure to inflation only predicting it would move from 2% to 12%, you would have much different returns from owning an index linked Gilt if interest rates stayed at 0% or rose to 10% or indeed 15%. In some scenarios you would be very profitable, in others you will lose money!
Top
Post Reply Previous topicNext topic
10 posts • Page 1 of 1

Return to “Gilts and Bonds”

Users browsing this forum: No registered users and 3 guests