Thanks to tea42,PeterGray,binkpa,OLTB,Cornytiv34, for Donating to support the site

Does anyone know what's this is? Note that the splines do not open up with pressing or releasing the plunger. It just causes the disc within them to move up and down. 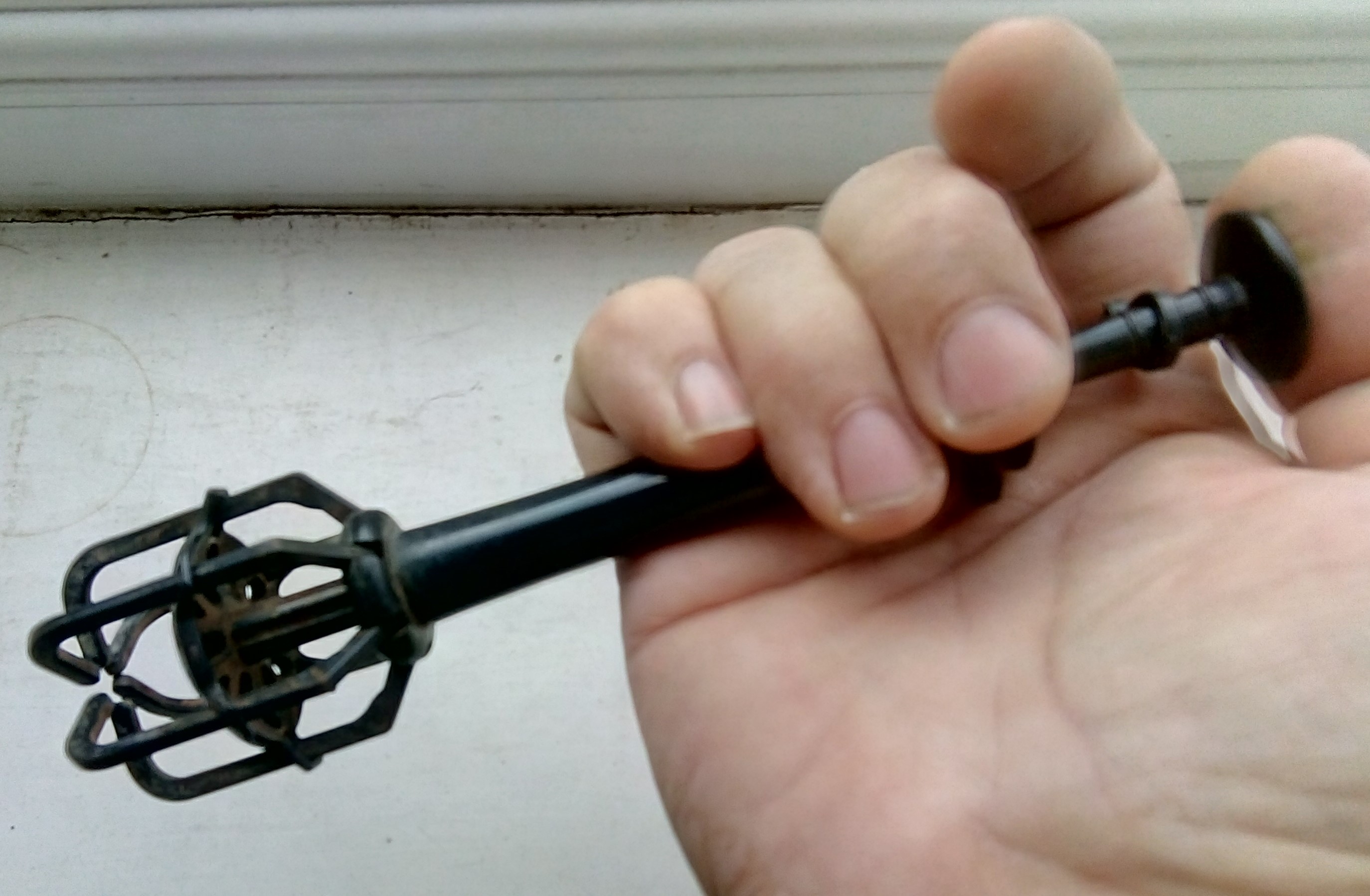 mc2fool wrote:Note that the splines do not open up with pressing or releasing the plunger.

Looking at the photos, it looks like they are meant to open when the plunger is released. I suspect that rust, debris or something-else is preventing the device from opening.

Possibly some kind of ballcock thing. There should be a hollow ball in the cage that floats.

An animal trapper of some sort? Maybe to hold a small snake?

admission.....maybe that wee sherry I had an hour ago wasn't that wee

Looks like it would be useful for squeezing a teabag in a cup of tea.

elkay wrote:Looks like it would be useful for squeezing a teabag in a cup of tea.

Or bouquet garni or something similar.

Do the fingers open if you pull the plunger?

A coffee frother for hipsters.

Doubtful, it's too small and certainly not strong enough to smash spuds. It's all plastic.

kiloran wrote:An animal trapper of some sort? Maybe to hold a small snake?

admission.....maybe that wee sherry I had an hour ago wasn't that wee

Yes, I found it clearing out my mum's place and have no idea what it is. It was in a kitchen drawer, although that may not mean much as in her later years she'd tend to put all sorts of things in all sorts of places. I am however pretty sure she never had any snakes.

elkay wrote:Looks like it would be useful for squeezing a teabag in a cup of tea.

AHA! And a quick google image search for teabag squeezer finds https://www.amazon.co.uk/Black-Teatool- ... B003V53XJG. Even has the cable ties in the same place! Thank you (and why didn't I think of that!) 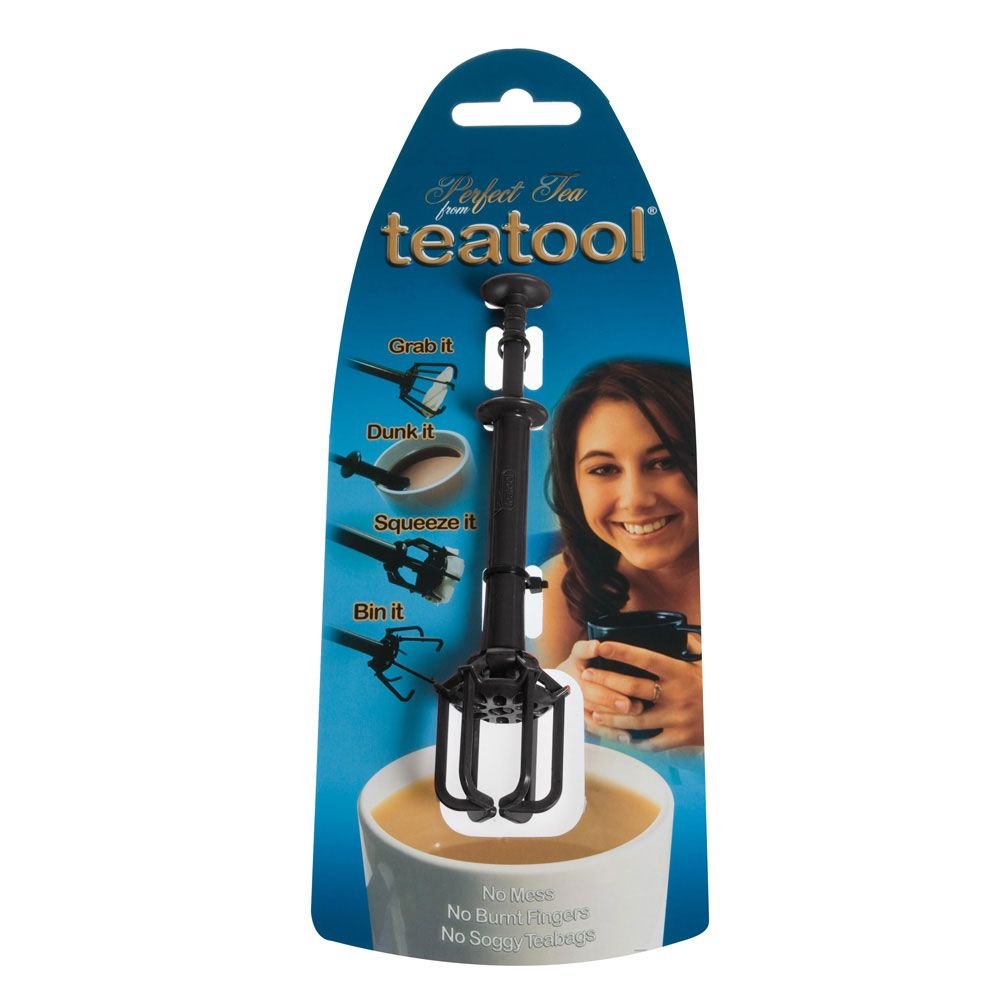 jfgw wrote:Do the fingers open if you pull the plunger?

You know, I never tried that!

So, the perfect gift for someone you want to annoy. Do they give it kitchen space, or do they get rid of it and risk giving offence?
Top

Who designed it? William Heath Robinson? It looks a somewhat over-complicated contraption for doing something simple. What is wrong with the stainless steel tweezer type? It makes as much sense as replacing a simple, traditional, reliable toilet syphon with a modern, leak-prone push-button contrivance with more than a dozen breakable plastic parts.

The package shows the contraption with the claws open so it appears they should open one way or another.

Apparently "Designed by a doctor who couldn't bear the drips created when transferring a soggy tea bag from mug to bin" https://www.lakeland.co.uk/12644/Tea-To ... g-Squeezer

But what ho, I think its existence has been worth it for the entertainment value here.

There surely has to be a bit missing from this gizmo? If you look at the 45 degree angles on the top ends of the arms, close to where the pivots are, it seems clear that an inch-thick spacer disc on the central stem would drive them apart as the plunger was pulled outward. Possibly spring loaded?

But as to what it was intended to grab, the mid boggles. Baked potatoes or hot coals from a fire? Or is it some kind of a fiendish instrument of torture? (Shudder.)

mc2fool wrote:Apparently "Designed by a doctor who couldn't bear the drips created when transferring a soggy tea bag from mug to bin"
D

I squeeze the bag against the side of the mug with a spoon and slide it out still squeezed, result, no drips. God knows how much this person spent perfecting and patenting that contraption.

For about half the price, you can get a stainless steel tweezer type squeezer like this, https://www.amazon.co.uk/TEA-BAG-SQUEEZ ... B001EU2FSK .

It is:
Cheaper;
Almost unbreakable;
Unlike the one designed by a doctor, it doesn't have any nooks and crannies that are impossible to clean;
It should last hundreds, possibly thousands, of years;
It is made from a material which is easily and economically recycled.

There are probably other advantages. There may be disadvantages but I haven't thought of any yet.

You can also get tea bags with built-in squeezers. They're tagged tea bags but have two strings on the tag - or actually two ends of the same string. You can tear the tag in half and pull the two halves apart, and the string tightens around the edge of tea bag and squeezes it.

Or you could just use a teapot...
Top

jfgw wrote:Do the fingers open if you pull the plunger?

You know, I never tried that!

Been trying to upload this to imgur for a while, finally succeeded....

Return to “Does anyone know?”

Users browsing this forum: No registered users and 16 guests